If you need information on any special request or pricing, please provide the details via email or call our head office with your inquiry. We welcome all of your comments and suggestions. Customer Service:

Great place great cars awesome deals you got to try them if you're dreaming of driving a luxury sports car give them a call They will take care of you.
Mike
It has been a few years since we rented a corvette for the day. I thought it would be fun to enjoy spring with my wife in a convertible. She wasn't to excited leading up to it but ever since that day she has been asking when can we do that again? Great experience! Thank you!
Adam
I rented their 1966 Classic Corvette. I dreamed of driving one of these all my life so I was elated to see such a car appear on their website. Kudos to Sheik Khan and to Roger. The whole team works well together and they hustle for you. Happy motoring.
George

For their fourth wedding anniversary, Garrett’s wife surprised him with a pearl-white 2010 Lamborghini Gallardo LP560 Spyder.

“It was exhilarating, but kind of scary at the same time when you realize you’re driving a car worth so much money,” says Borland, a marketing consultant and automobile enthusiast.

He and his wife planned to celebrate their anniversary with a trip to Niagara Falls on the first weekend in May, and he assumed they’d be driving there in the family car. 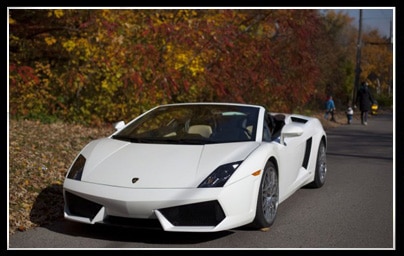 But staff from Affinity Luxury Car Rentals quietly delivered the $400,000 sports car to Borland’s home, ensuring he was awed to the max when he spotted it parked in their driveway.

“I had no idea, whatsoever,” he says. “She completely surprised me. The car was dropped off at our house early Friday morning.

“We both had a fantastic time, and driving a car like that certainly isn’t something you get to do every day.”

Affinity is among several GTA companies that rent out luxury vehicles, including such marques as Mercedes-Benz, BMW, Range Rover, Lexus and Porsche — perfect for milestone events such as a wedding or anniversary.

A select few offer ultra-fine cars, such as Bentleys, Ferraris or Lamborghinis, for customers who want to feel like a million bucks for a couple of hours, a night, a weekend or longer.

Affinity owner James Schwehr says he never ceases to be thrilled by watching a client’s reaction.

“Stuff like that gets me. I love creating those kinds of experiences,” he says. “We sneak up early in the morning and put the car in the driveway, so they see the vehicle of their dreams when they step outside. I’ve seen some break down and cry.”

Schweher’s car-rental business started small in 1992 near Dupont and Dufferin Sts. It has now grown to a fleet of 200 cars, trucks and exotic autos at five locations across the GTA. A sixth spot opens next month in Mississauga.

In addition to the luxury and exotic cars, Affinity rents a wide variety of more practical vehicles, ranging from a $14,000 Hyundai Accent to a $65,000 GMC Yukon SUV.

It can also be rented for as little as an hour for special events such as wedding photos. A three-hour wedding shoot, with an employee driving the car, costs about $700.

The Gallardo is worth about $400,000, and costs Schwehr $18,000 to insure for six months. He wouldn’t dare have it driven during a Canadian winter.

Instead, this fall, Affinity’s exotic cars will be shipped to Las Vegas, where Schwehr partners with a Nevada rental agency.

Some of Affinity’s clients rent the luxury cars when they are considering buying one, and want more than a brief dealership test drive.

“Some companies have incentives for their top sales people, who are rewarded with things like trips or having an exotic car rented for them,” adds Schweher.

With classic American sports cars becoming more popular, Affinity is expanding its stock of those to keep up with demand. Its 1966 Mustang convertible is already booked for rentals right into the fall, and Schwehr is now looking to add a 1965 or ’66 Corvette and early Challenger and Camaro models to his fleet. 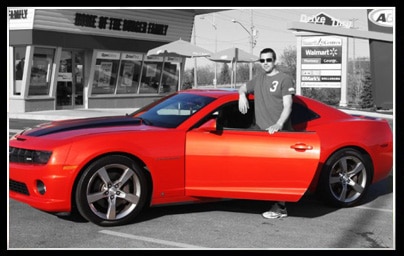 A modern muscle car was the ride of choice for Marvin Martin, who rented a 2010 Chevrolet Camaro SS for a May getaway with his wife — a 40th birthday gift from his family.

“It’s been kind of a dream of mine to have a car like that,” says the design engineer with a Waterloo welding firm. “A BMW just doesn’t do it for me. I’ve always been a GM fan and, when they came out with that retro-style Camaro, I immediately fell in love with it.”

He and his bride of nearly 17 years cruised about 500 kilometres to London and back, stopping at a retro-style A&W in Waterloo to have Martin’s picture taken with his dream car.

GOOGLE REVIEW
Solid car rental company!! Their cars are luxurious, top notch and client service is impressive. My first rental had an issue with the brakes, I called and was swapped out into another vehicle almost immediately with no issues. Great experience overall and highly recommended. Keep up the good work folks!

GOOGLE REVIEW
Service were efficient and professional. They confirmed rates with my insurance company and had my rental booked within an hour. Shane delivered the car to me on the rental day on time. Car was clean and even with tire dressing on. Shane explained everything, checked stone chips and took pictures. Overall very good experience with Affinity and their employees.

GOOGLE REVIEW
This was my first time renting a luxury car. I rented a Porsche 911 and had a very good experience. Anjanie in Mississauga was very helpful. The car was clean and performed very well. I thought the price was good compared to some of the other Exotic car rental companies that I checked. I would rent from them again.

GOOGLE REVIEW
Staff is very helpful and knowledgeable when inquiring about cars and availability. I rented the Ford Mustang convertible for my grandmas 81st birthday. We had a an amazing day driving around in this beauty of a car. Prices are reasonable and staff very is friendly. They went above in beyond to make sure we enjoyed our day. I would definitely rent again from here in a heart beat. Thanks again for everything!

GOOGLE REVIEW
Great experience renting their 911 C4S Cabriolet to celebrate my birthday. Neil B. went above and beyond - super communicative car lover who worked hard to make the day perfect. Car was in excellent condition, easy pick up & drop off.

Only problem is the car looked a little too good in my driveway ... I'll be back for another rental!
5
Excellent